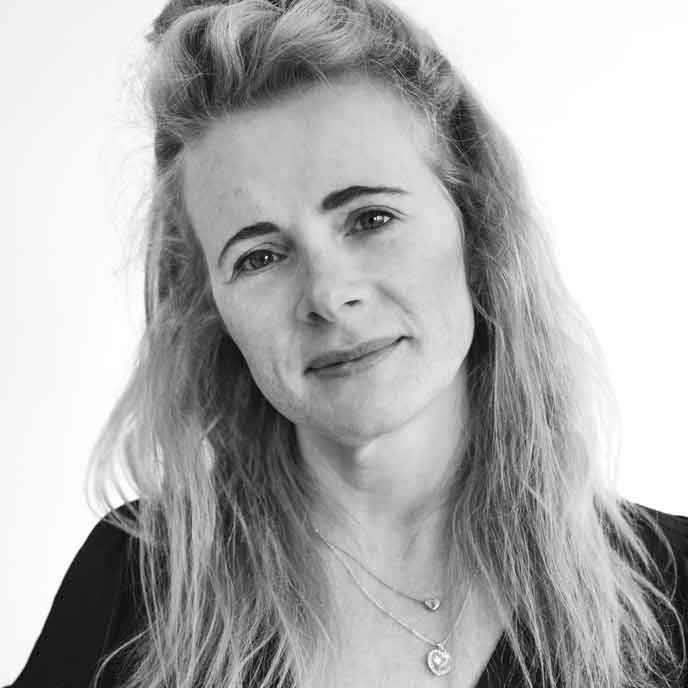 Known as the largest 5th of November extravaganza in the world, Lewes Bonfire Night has been running for over 300 years. With an average of about 5,000 people taking part in the displays and the processions, this world-famous event draws in more than 80,000 spectators each year from around the south of England and further afield. Given that Lewes usually has an average population of about 17,000, this raucous celebration really puts the town on the map and for good reason.

If you’re unsure what to expect, the Daily Telegraph once summed it up beautifully by describing it as ‘a head-on collision of Halloween and Mardi Gras’ and we would be inclined to agree!

There’s a lot going on at this event and preparation is absolutely key. We’ve put together this guide on everything you need to know about Lewes Bonfire Night to help you plan ahead.

Held on the 5th of November every year (unless it falls on a Sunday, in which case it’s held the day before), bonfire night in Lewes marks Guy Fawkes Night, the date the Gunpowder Plot was uncovered back in 1605 when Fawkes was discovered hiding explosives under the House of Lords. It also pays tribute to the failed assassination attempt of King James I.

East Sussex itself has a long history of bonfires and torchlit processions. The tradition of torch carrying and bonfire lighting on the 5th of November has evolved over the years to include fireworks and more of a festival vibe, and Lewes is the only town in the country that still honours the old traditions along with the new: 17 burning crosses are paraded through the town along with a number of large effigies, the latter of which are later burned in the bonfires. More recent years have seen the introduction of some more modern-day names featuring as effigies: 3D caricatures of Boris Johnson, Donald Trump and Angela Merkel have made an appearance at this historic event over the years.

There’s also a wreath-laying memorial to mark the execution of a group of protestants, known as the ’17 Lewes Martyrs’, who were burned at the stake in Lewes between 1555 and 1557 under the reign of Mary I.

The event concludes with multiple bonfire displays, each magical and spectacular. 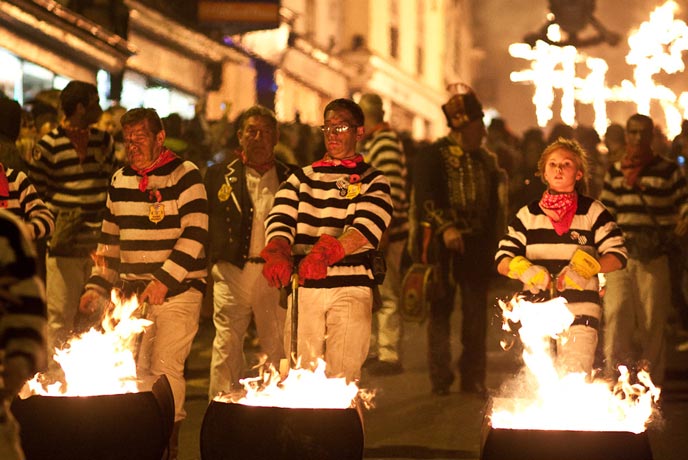 In conjunction with the local emergency services, there are seven societies responsible for organising six separate firework displays and multiple processions throughout this East Sussex town. You’ll notice that each Lewes bonfire society operates a recognisable dress code and any eagle eyes will be able to identify them easily:

Waterloo: you’ll recognise this group due to their red-and-white striped sweaters and the Ancient Greek, Roman and Mongol invader costumes.

Southover: dressed as pirates and monks, this society wears red and black and is known for carrying burning crosses as they proceed with their very own Samba band.

Lewes Borough: known for dressing as smugglers in blue-and-white striped sweaters, this group is also easily recognisable owing to its Zulu and Tudor costumes.

In addition to this, there are between 25 and 30 additional societies based across Sussex that come to this historic event and take part in the processions and displays.

What to expect from Lewes Bonfire Night 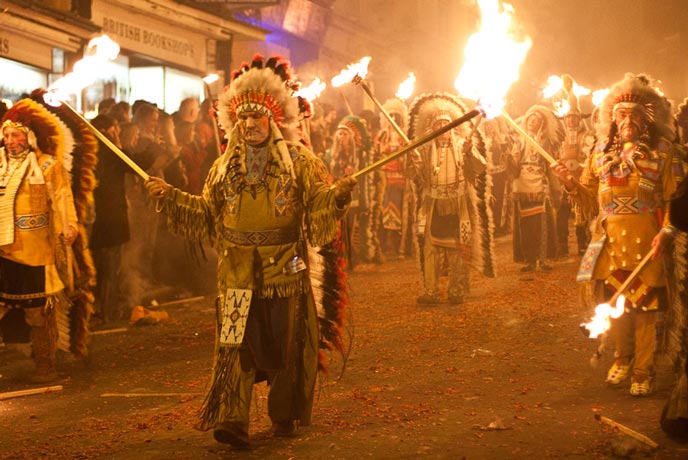 The event starts at around 5pm and runs throughout the evening, with the Grand Procession beginning at 9pm and the lighting of the bonfires starting at around 9.30pm. The party goes on until the fires die down in the early hours, so take lots of layers and clear the diary the next day for a much-needed lie-in.

Another iconic part of this event is the ‘barrel run’ which happens at the beginning of the evening and involves teams of ladies and men pulling flaming tar barrels down Cliffe High Street and subsequently hurling them into the River Ouse.

The main event takes place in the town with the parade going down the high street a few times. Each society then disperses to its own area of the town where more displays and processions take place and effigies are set alight in one of the large roaring bonfires.

In addition to the displays and processions, plenty of local venues and locations are also involved, providing both indoor and outdoor entertainment for adults and children.

Is Lewes’ bonfire festival suitable for all children? 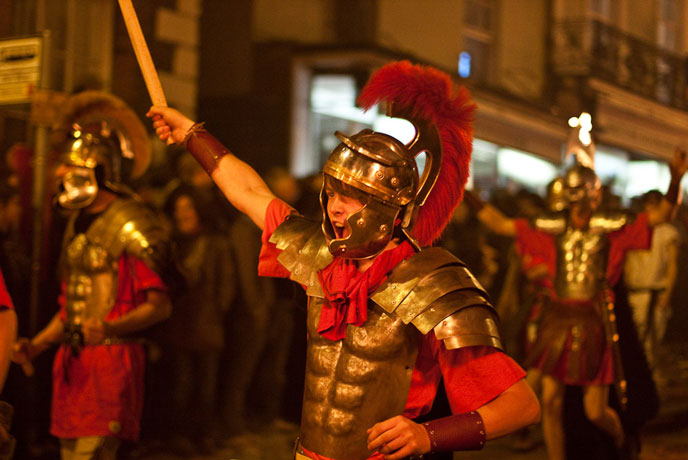 Although this historical event will be an unforgettable experience for older children, Lewes Bonfire Night may not be suitable if your child is of buggy/pushchair age. The town gets very busy and there’s a distinct lack of space meaning you could very easily end up feeling quite overwhelmed with a small child in tow. Similarly, this event may not be suitable for anyone with any kind of restricted mobility.

What logistics should you be aware of? 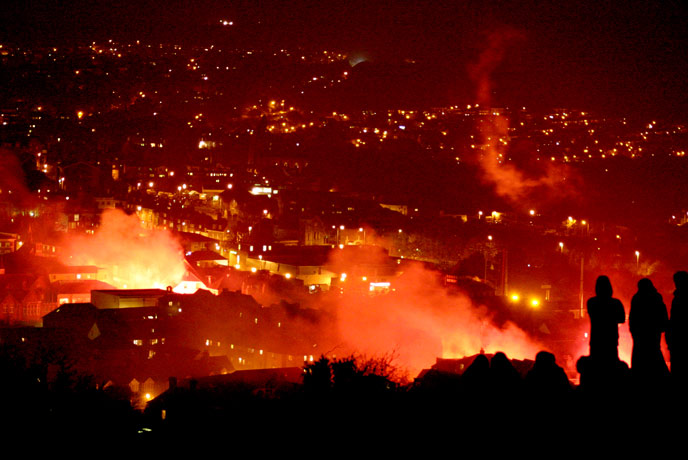 In terms of local facilities, access to toilets as well as food and drink is extremely limited. Because of the sheer volume of footfall to this town, pubs, restaurants and bars are full to the brim and sometimes they host private parties that have been booked far in advance. For food and drink, you’ll want to pack up enough supplies to keep you going long into the early hours: think carbs, snacks and plenty of water. There are also street vendors selling food and drink.

When nature calls, toilet facilities are limited but there are usually a few loos dotted throughout the town and some pubs or restaurants may allow you to use their toilets but don’t rely on it. There are toilets in the magistrates’ court car park but they’re not open for the entire event so the facilities in place for the event are  probably your best bet.

Lewes itself is quite a small town so it’s best to avoid arriving by car. There are lots of road closures and parking restrictions that happen throughout many parts of the town from as early as noon on the day. The roads coming in and out of Lewes are closed completely from around 4.45pm onwards. Even if you decide to beat the crowds and arrive nice and early in the morning to bag a parking spot, you’ll likely get caught out as it’ll be difficult to retrieve your car until the event has wrapped up, usually 2am or even later. Public transport is also tricky: local links are cancelled from late afternoon/early evening in order to manage the vast crowds arriving. Local train services won’t stop in the town or even the nearby villages from about 4pm onwards and usually won’t do until the following morning.

Staying locally to Lewes is most definitely a wise choice if you want to fully experience this spectacular event without getting bogged down with travel logistics, so accommodation-planning preparation is key. After filling up on a full English at your cosy cottage, pack up a bag of supplies and plan to travel to the town via foot, on a bike or by public transport if you leave early enough to beat the crowds.

Each of the bonfire sites are ticket-only and you’ll be able to purchase tickets in advance or you can sometimes book them at the entry gate. Ticket costs will vary depending on which area of the town you decide to go to. Some of the society bonfires are more family friendly than others and each has quite a different feel to the next so it’s worth doing your research beforehand. Don’t forget to bring cash: you’ll need it for ticket-entry purchases and for the many charitable donation boxes doing the rounds on the day.

It should go without saying that the British weather in November can be unpredictable but we’ll say it anyway: bring waterproofs, boots and coats and be fully prepared for them to smell like firecracker smoke for days to come!

How to stay safe at bonfire night in Lewes 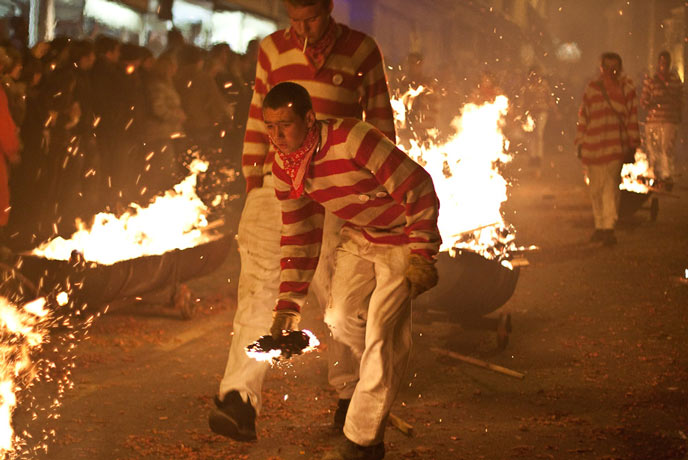 It’s worth bearing in mind that sparks will likely fly from the bonfires so keep a safe distance at all times. If you’re thinking of bringing your own fireworks, please don’t: the police will quickly take them away from you.

Also, since asthma sufferers tend to experience heightened symptoms around firesmoke, make sure you carry an inhaler with you. Although St John’s Ambulance is on standby, do your bit and try to ease the pressure on them by ensuring you have any necessary medications with you.

If you feel uneasy around loud crowds, bring some protective eyewear and earplugs to help you feel a bit more comfortable. They’ll likely come in handy, especially when the very loud bangs happen.

Lastly, if you or your child see a discarded torch in the street, do not pick it up: a specialist team responsible for collecting used torches will arrive at the end of each procession.

Above all, have fun! The vibe of this event is fast-paced, exciting and exhilarating and is the undisputed frontrunner of all 5th of November celebrations that take place across the world. Naturally, an event of this magnitude attracts many visitors from far and wide and accommodation options are usually booked up far in advance. If you are thinking of experiencing this iconic event for yourself, you’ll need to book your accommodation nice and early.

And, if the Daily Telegraph’s review is anything to go by, we’re pretty sure you’ll remember, remember the 5th of November for many years to come!